The Japanese Used Cars that the St. Lucian’s must give attention now! | MYK Japan

The Japanese Used Cars that the St. Lucian’s must give attention now! | MYK Japan 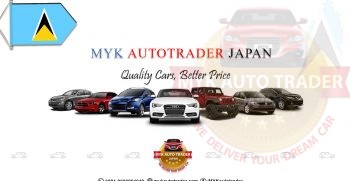 The revolutionary creations of the Japanese auto industry in recent years, as well as their performance in history, has made their automobiles the most favorite cars in the world. The same scenario is in St. Lucia where people prefer Japanese cars to American and European ones.

Lancer has been one of the top creations of Japanese car manufacturers for a long time. The company launched it for the very first time in 1992 and continued its manufacturing until 2016 when Mitsubishi decided to stop its production. However, it is available as a Japanese used car in St. Lucia. Its all-wheel-drive concept with 4-door sedan and 5-door station wagon makes it one of the best options for driving lovers. Its 2-liter turbocharged I4 engine gives Mitsubishi Lancer Evolution an edge over all other vehicles available in the market.

While talking about epic cars, Nissan GTR Godzilla remains in the top five. Its artisan, Takumi, designed a fantabulous creation that is the masterpiece of Nissan. Its 2+2 seating system makes it the most useful Japanese used car In St. Lucia for the families. The manufacturers gave it a name due to its excellent performance on the roads. What does make it Godzilla? Well, its impressive 632 Nm torque and 562 horsepower engine with support of 3.8 L twin-turbocharged V6 engine makes it the best choice in the market.

Honda is one of the top car manufacturers in the world and has a strong clientele in the whole world. Its new launch of Civic with the name of the Type-R has also attracted the car lovers not only in Japan but also in other regions as well. Honda changed the whole concept of supercars through the launch of Honda Civic Type-R with 4-cylinders turbocharged 1996 CC engine. Another feature is it’s lean looking, which has amazed everyone who takes interest in new designs as well.

The look and style of a car matter, the maximum, as it is the only feature in a car that others can look and feel. Mazda Miata/ MX5 fulfills all your needs if you are conscious about the looks. Its first launch was in 1989 and since then, it has won numerous hearts in the whole world. According to an estimate, the manufacturers have sold around 940,000 units in the world at the end of July 2014. It is one of the most beautiful cars in the world now. However, its overall handling is also not less than its competitors are, and with each upgrade, it has improved it a lot.

We are hopeful that the reading of these cars will help you choose the best Japanese used cars in St. Lucia to enjoy what matters a lot in living a luxurious life.