How can a bicycle damage Corolla bumper? Let’s see!

How can a bicycle damage Corolla bumper? Let’s see! 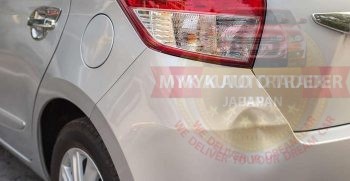 Have you ever thought about the devastating damage of due to its accident with a bicycle? Well, people do not think so. But, in some cases, the situation can be different. We will discuss one of the events in the following post in which Toyota Corolla, a Japanese car collided with a bicycle and the bumper damaged extraordinarily.

A video is available on the social media pages in which we can see that a bicycle collided with a Japanese used car in China. The shocking fact is that the bicycle damaged the bumper very badly. Surprisingly, the bicycle is intact, but the bumper has been destroyed. More interestingly, the car is Toyota Corolla that has a reputation of one of the strongest cars in the market.

The damage to the bumper is such a devastating one that some people think that it is a fake video. The reality is that everything is true in this video. Local police also confirmed the incident and damages as a result of it. The police say that the cyclist was responsible for this as he was trying to move against the traffic flow. This unlawful act became the cause of this accident that astonished the Japanese car manufacturers as well.

Fortunately, there was not a great physical loss as the cyclist suffered minor injuries. However, he had to pay the amount for the repairing of the bumper. The car owner also enjoyed the insurance coverage as well. It means that the cyclist had to face all the circumstances against his unlawful activity, whether physical injuries or financial loss.

This accident shows that the bumpers of Japanese used cars are of low quality because a bicycle can damage them quite easily. This argument has great importance. Conversely, the bicycle’s superior engineering astonishes us as well. However, the reality is different as there is nothing abnormal in the whole incident.

The basic concept behind making the bumpers flexible is to keep the driver and passengers safe. This flexibility helps the bumpers accept pressure and reduce pedestrian injuries. These bumpers also have the ability to absorb impact force efficiently to decrease the effect of damages in case of an accident. These reasons make modern-day cars more secure than the previous ones.

After reading the features of a flexible bumper, the readers can consider it one of the most effective safety features, but it is away from reality. The responsibility of a bumper is just to curb down the effects of an accident that can be more than the expectations if there is a less-flexible bumper.

Overall, we can say that the bumpers of Japanese used cars are very efficient in their job. They help the cars in a road accident manage the pressure and lessen the collision force. Many people will not accept this opinion, however, there is nothing against denying this fact.