How to Avoid from Buying a Damaged Japanese Cars to import in Pakistan?

Japanese Used Cars Exporter > Blog > How To Buy > How to Avoid from Buying a Damaged Japanese Cars to import in Pakistan?

How to Avoid from Buying a Damaged Japanese Cars to import in Pakistan? 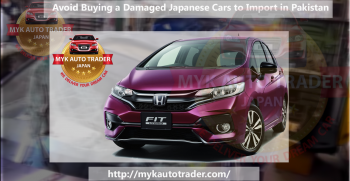 On the other hand, the percentage of imported cars increased 67% which is huge. For your interest, we want to mention that 53,600 units were imported in 2015-16 while the number was 32,100 units in the same period for the previous year.

The reputation of locally assembled cars is not considered excellent and we mention the faults of these vehicles in our daily routine. But, when we talk about the imported especially Japanese used cars in Pakistan, we think very positive about these vehicles.

The reality is that the issue is same but the reason is that normally, these vehicles are second hand. We find these cars in a shiny look, but most of these cars faced accidents or damage when these were in Japan.

We must know that the importer is a businessman and he wants to earn more and more in any case. The actual prices of Japanese cars are higher than the locally assembled cars. On the other hand, we think that the prices of imported Japanese cars are low, but the reality is that these cars have been driven in Japan so the chances of damage are higher.

To understand how much the damage is, there is the auction sheet with the car and it is very important for all the buyers understand what is written on it. The grades are given to these vehicles and if you want a new and a scratch free vehicle, you need to buy an S grade car as these are the best option for you if you want to enjoy the best driving experience. In any case, you must not consider those Japanese used cars imported to Pakistan, which have the grade less than 4 as the damages can be fatal so the quality will be well below average.

Another issue which can damage your investment is that the auction sheets are also tempered. The best option for the buyers is to import the Japanese used cars with the help of direct importers. It is due to the fact that these people provide you the actual condition of the vehicle and do not compromise on the quality. Although, you have to pay a bit high price, but you will get the excellent product which is your ultimate aim while you buying a Japanese used car in Pakistan.