How to use Low Gear in Automatic Transmission of Japanese Cars?

How to use Low Gear in Automatic Transmission of Japanese Cars? 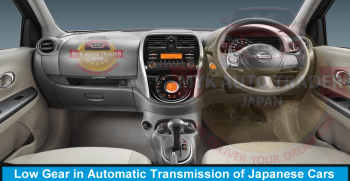 The best benefit of Japanese and other imported cars is the automatic transmission as you have no need to change the gear frequently and enjoy the driving at its maximum. Due to this particular reason, most of the people have questions about low gear. They do not know the utilization of this gear and value of it in fuel efficiency and engine’s performance.

The exporters of Japanese cars like www.mykautotrader.com have developed the awareness among the people about automatic transmission and low gear, which is helping the drivers and car owners to enjoy the driving with all features and facilities.

Low gear has a great value in fuel efficiency as the use of this gear increases the automobile’s performance and along with that, engine’s power also multiplies. You just need to know how to use it and in which situations, it is useful.

How to define Low Gear?

In many countries like Pakistan, most of the people give the name of first gear to it and many Japanese cars have the automatic transmission where its value is very high. At this mode, the engine slows down and along with that, torque increases. It is also important to mention that in automatic transmission, the gears shift automatically from first to second and so on. It all depends on the speed of the vehicle. When you use the low gear, the car will remain in the first gear even the engines wants to shift it to a higher gear. Due to this, the speed will be at a minimum level while the engine will generate more power and torque will be increased.

It is one of the most important reason due to which low gear has the importance. As described earlier, low gear generates more power and due to this particular reason, the task becomes easier. It must be observed that the automatic Japanese cars switch gears when speed changes or you notice a difference in RPMs. If it does not change with the changes in speed and RPMs, the engine will feel pressure so you must check the speed limitations while you are using low gear. These limitations have been described in the manual available along with the vehicle.

For Driving Down on the Steep Road

When you are driving on the steep road and coming down from the height, you need to apply the brakes if you have manual transmission, but due to maximum use, the chances of brake failure increase. But with an automatic transmission, you just need to apply low gear and you will be able to complete the trip without any trouble.

Due to the gravity, when you are driving your car upward, the pressure comes on the engine and it has to work a lot. It is just like you are towing something towards the top. To manage it easily, it is easier to use the low gear for handling the situation properly.

The Use of Low Gear in Automatic Transmission

It is very important to mention that you need to know how to transfer the Japanese automatic car in low gear. If you want to do so, you first need to ease off the gas pedal. When the speed will come down and transmission will be shifted into low gear, it will be the time when low gear can be applied. If you will try to implement it earlier, you will have to face severe circumstances which can damage the engine as well.