The Comparison Between Japanese Used Toyota And Honda Cars

The Comparison Between Japanese Used Toyota And Honda Cars 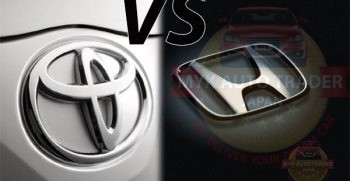 The Comparison Between Japanese Used Toyota and Honda Cars.

Toyota and Honda are considered one of the best and car of the market in Pakistan which has a very strong fan following. We always find people around us who compare Toyota and Honda cars all the time and have their own favorite while discussing this debatable matter. The most concerned topics often discussed are performance of vehicles, body shape, reliability, fuel efficiency and engine quality. There is a major choice shift from local cars to Japanese used cars in Pakistan because people are buying both the brands for their personal and family use which are foreign assembled and imported with solid body as compared to local cars.

Let’s find out the disparities between the two most popular Japanese used car brands in Pakistan!

Generally, both brands, Honda and Toyota, are almost equivalent to each other and have almost the same strengths. But still, there are many factors, which make Toyota different from Honda, let’s find out:

Both the companies take reliability and durability as the first priority for its customers, though Japanese local or international market. When a buyer wants a vehicle with maximum customization which ensures satisfaction and safety, he or she chooses Honda but when there is the issue of reliability and better performance, Toyota will be the better choice.

Honda has an edge over Toyota when we consider the customization and performance of vehicles on the road. Honda provides you better automized features, acceleration and responds quickly against your instructions. The Odyssey of Honda is the perfect example, which has a 9.1 performance rating while Sienna from Toyota has a 8.4 overall rating.

The buyers give second priority to interior of the vehicle after the performance but have almost equivalent priority as performance. Toyota is far behind from Honda in the interior because Honda has a quality to provide sleek and attractive designs of interior to the buyers. On the other hand, Toyota provides standardized and average designs, which do not inspire the buyers generally but they have other factors to entice with.

When we compare the prices of both the brands, we find that Toyota provides you a money saving opportunity with maximum features. Honda has higher prices and can become unaffordable for some buyers.

If we compare both the brands one-by-one, we can see some major differences. The mileage of Honda in the city is better than Toyota, but on highways and motorways, Toyota performs exceptionally well. Toyota also has the large cargo space and can adjust more passengers as well.

Overall, Toyota is the most favorite Japanese used cars in Pakistan due to its fuel economy, safety and low maintenance cost. Honda does not provide you required fuel consumption and therefore, remains second all the time when comparing it with Toyota.