The most Favourite cars of the Japanese buyers

The most Favourite cars of the Japanese buyers 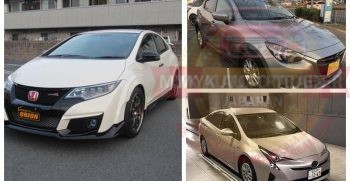 While talking about the automobile industry, Japanese car manufacturers are at the top due to their innovative ideas. These ideas help them produce the most practical and stylish vehicles for their consumers. These features have made the Japanese used cars the most favorite ones in the world. However, the Japanese buyers are very specific in their choices and give an edge to some vehicles over others. Here is a list of the most popular Japanese cars that the Japanese buyers prefer:

K-Cars are the most suitable cars for budget-friendly people. These cars are excellent in fuel-efficiency. Honda N Box is a kei car that is available with a 660CC engine that makes it the lightweight vehicle. It is also available with fitted turbochargers that can help you achieve a good speed on highways. Honda N Box is the best choice for those who want low fuel consumption and good space for their family. Until today, it is the most favorite car of Japanese people.

The Toyota Prius has been the most popular full-hybrid car for many years in the world, and it is the same case in Japan as well. The Japanese car manufacturer, Toyota, has been continuously updating the specifications and features. However, 2018 Toyota Prius JDM is the most popular model in Japan. Its exceptional fuel economy, both in the city and highway, huge space, and powerful specifications have made it the best choice for compact car lovers not only in Japan but also in the world.

The Mazda 3 is the second compact car that has received great appreciation from the Japanese buyers. The manufacturers introduced it in 2003 for the first time. They improved its exterior, seating space, and driving experience in the next models at a larger scale. Blind spot monitoring and traffic signs recognition are other features that make the Mazda 3 one of the best choices for compact car lovers.

The sporty look of the Honda Civic creates the uniqueness for the Japanese buyers. While comparing it with other compact cars, its luxurious look is something that makes it the most favorite one of the people who want style at its maximum. It is available in all variants like hatchback, coupe, and sedan. Its sensing mechanism, adaptive cruise control, automatic emergency braking, and forward collision warnings are the advantages that no other car in this range can provide.

Overall, Honda N Box is the most popular car in Japan. People prefer it due to the most affordable price, ample space for a family, fuel economy, and amazing specifications. We are hopeful that this discussion will also help you buy the most suitable Japanese used car in Trinidad for you as well.