Which Hybrid Japanese Car Is Your Choice, Honda Fit Or Toyota Prius?

Which Hybrid Japanese Car Is Your Choice, Honda Fit Or Toyota Prius? 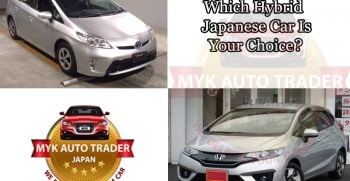 When we talk about the most prominent hybrid cars in the market, Toyota Prius and Honda Fit are those Japanese cars which have been dominating the market for last few years. Both of these vehicles are considered the best vehicles when we talk about comfortable ride, exceptional fuel economy and a huge space of cargo in a compact car.

The reality is that these two Japanese cars are highly comparable, especially in Pakistan and people are always hesitant when they have to choose a car for them. To help them out in taking this decision, we decided to describe the features of both so that, you will be able to finalize your favorite one according to your wish, requirement and choice.

As this discussion is based on the comparison of the Toyota Prius and Honda Fit and in Pakistan, the used Japanese cars are driven normally, so we will discuss the same model of both the vehicles as with the updated models, the features can be changed.

Honda is the name of quality and style in Pakistan as it offers some wonderful cars in the market. The Honda Fit is a hatchback car which has been introduced by the Japanese car importers in Pakistan and is popular in the world due to its exceptional fuel economy and electric motor. It has considered eco-warrior’s companion which makes it more reliable for the Pakistani people who are actually in search of economical fuel efficient vehicles.

The second generation Honda Fit has a wonderful exterior and interior. It is considered a large car when we see the series of compact cars all over the world. The engine is a 1490 cc petrol which shows that it is an upgraded fuel efficient vehicle in the market. When the efforts of two motors combines, it can be driven for almost 100 kilometers in 3.3 liters. The interior of Honda Fit is very aggressive and you will find fully loaded vehicle when you will drive it.

It is a fact that the Toyota Prius is considered the legend in the market when we discuss the best hybrid cars. It was the first car which got success in the market commercially as a hybrid vehicle. It is considered as a standard when we want to examine the hybrid vehicles available in the market, but still, the company is trying to improve it more. In the recent models, the fuel efficiency has been improved more with the introduction of reducing drag co-efficient and incorporation of lighter components for improving the concatenation with the hybrid Drivetrain.

The engine which has been incorporated in it is 1798 cc which improves the driving experience. The weight reduction policy has been increased to reduce the size as well. Due to these improvements. The fuel efficiency has reached at 3.90 liter per kilometer approximately. The interior of the Toyota Prius has already been appreciated by the critics and still the manufacturers are trying to improve it more and make this wonderful car the most reliable one even in the future.

The reality is that both Toyota Prius and Honda Fit are the excellent choices of the buyers, but the fact is that those people who want comfortable and luxury ride, they will feel Honda fit better, but against it, the fuel economy feature will not be as good as they are thinking. On the other hand, the Toyota Prius is exceptional when we talk about fuel efficiency and its performance is even better when you have to move into urban areas. Now, it is up to you which hybrid Japanese used car should be in your garage.