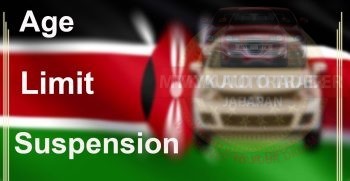 The announcement of this suspension gave relief to the Japanese car importers, as they were not able to fulfill all the needs of the buyers of the Japanese used cars in Kenya. Initially, the age limit was eight years, and government officials decreased the age up to five years recently. However, they have suspended the age limit now, and the buyers can go for any vehicle that attracts him.

However, it is in a transitional phase as the Trade and Industries committee that the National Assembly establishes is discussing it with the trade correspondents. The trade CS Peter Munya confirms that the proposal is under discussion, and the committee will ask the public as well to give their suggestions.

The committee started these meetings after claiming that the government officials were not taking pieces of advice from them, and trying not to involve them in major decisions. They also showed concern about the pronouncement of Munya as well.

The Trade CS also confirms that there is a status quo about the decision as to the members of the committee and other stakeholders want to get feedback from all the aspects of society. After making them involved in the decision-making, the suggestions will go into the parliament. In the case of passing these suggestions, it will become a law.

While talking about the new set of regulations, the officials are confirming that they will start it from July 2019. In case of continuation, the age limit will decrease to three years in 2021, and from 2024, there will be no age limit for Japanese used cars in Kenya.

Conversely, the Kenyan government also wants to implement restrictions on imports of those cars that exceed the limit of 1500 CC. To implement this strategy, the officials are thinking that the age limit of such cars should exceed five years.

The Japanese car sellers, importers, and other industry-related people are against this decision. They think that more than two million people will face circumstanced due to this decision. Therefore, they are opposing it.

Overall, there is a difference of opinion among experts and dealers. Some think that the proposed national automotive policy is better while others consider it punitive. Therefore, we can wait until the final decision, which is not far away now.