Which Is The Best, Toyota Corolla Fielder Or Honda Airwave?

Which Is The Best, Toyota Corolla Fielder Or Honda Airwave? 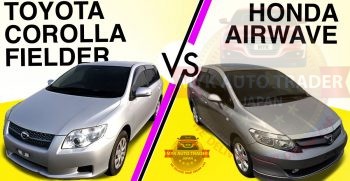 Although, Honda Airwave and Toyota Corolla Fielder are not the similar vehicles, still the closest competitors when the Japanese used cars in Kenya and other African countries are considered. Both the cars have their own features and qualities and give a sophisticated look of a compact car although are wagons. In the following post, we will observe both the vehicles keenly and give you our recommendations after that.

The manufacturers introduced Toyota Corolla Fielder for the first time in 2000 and people still love it due to its large shape and style. You can use it as a town car when you need it and utilize it for long distances as well because you have a wonderful space for passengers and luggage.

Honda started the manufacturing of Airwave between 2005 and 2010. It has been discontinued after that and Honda Fit Shuttle took its place suite successfully.

It is a 5- seater station wagon and compensates five adult passengers quite easily. The latest versions also have electronic retractable mirrors and power windows as well. The front interior consists of big space, driver’s mobile phone adjustment, and glove compartment and door pockets. You will find a radio, plastic cover and climate control there as well.

It also has five seats with a bit more space of two inches. You can adjust five adults and a couple of minors inside. You also have the leg space there to adjust tall people. The boot volume is much bigger than the fielder and is 473 liters. It also provides you the large space for cargo adjustment as well.

When we discuss front interior, there are cup holders, center console, space for mobile phone and other paraphernalia, radio, leather seats and a glove compartment. The exterior offers you a large ground clearance and give a wonderful sporty look.

This is the first part of the comparison in between two wonderful Japanese used cars in Kenya and other African countries. We will present the second part of this comparison here on these pages shortly.