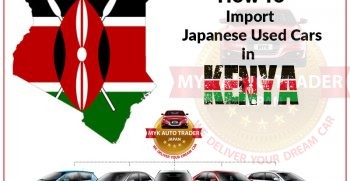 Like many other countries, where governments impose heavy import duties on Japanese used cars, Kenya has also certain rules and regulation and every importer must follow all of them while importing vehicles from Japan.

Before importing Japanese used car to Kenya, you need to know following rules and regulations implemented by Kenyan government:

The age limit of a vehicle is the most important feature and importers must follow it. According to Kenyan laws, you cannot import these vehicles which have the difference in between manufacturing and registration in Japan for more than one year. Another major aspect is that you cannot import vehicles which have a model year before 2011. Kenyan government does now allow the vehicles older than 2011 in Kenya.

You can import only right hand driven cars in Kenya. If someone wants a left-hand driven car in Kenya, he or she must need a special permission from the officials. You can get permission only when you are importing ambulance or a car on special duty.

Another major rule, which must be followed before importing Japanese used car to Kenya, is the road worthiness inspection process. JEVIC or QISJ departments perform this duty before shipment. After clearance, one of these entities will issue a certificate and after that, you are entitled to ship a car. If your vehicle would not pass this test, you will go for repairing and after that, the entity will re-inspect it.

You will get your required vehicle in your country after 21 days or more. This timing depends upon the transit duration from Japanese port to Kenyan port. Shipment mechanism also plays a major role in importing vehicles and the time depends on the methods, which have been adopted in the import process.

When we consider the taxable amounts to buy a Japanese used car, we find that there is a huge complexity in it. To help you out understand the actual amount of tax, we calculated it 74% of all taxes and engine size does not matter in it.